Ahjamu Umi is an organizer for the All African People’s Revolutionary Party (A-APRP) since 1984. He has organized for the party in several countries on three continents and the Caribbean. He is a senior labor organizer for one of the largest labor unions within the U.S.  He holds a Masters Degree in Economics/Political Science and he is the author of three full length literary fiction novels as well as a published study on mass incarceration. He has led and done bodyguard work to protect activists against violent white supremacist groups as well as led dangerous efforts to “liberate” foreclosed properties for evicted and houseless peoples. He runs his own blog site called Positive Action

Some topics that Ahjamu has spoken on are:

Pan-African Writing/Fiction & Culture as a Tool for Justice:

See Ahjamu Umi in action in the below link:

Ahjamu Umi is a part of the Cultural Workers Bureau.
Book Now 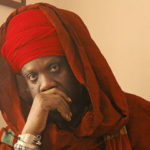